A new page will open onto our secure Reliv Corporate website.

Feel Your Best Through Cutting-Edge Core Nutrition With Reliv Now

You try to eat right, exercise regularly and maybe even take a multivitamin. Right now, you might feel pretty good. But why settle for pretty good when you can feel great? Reliv Now® with LunaRich® goes beyond a standard multivitamin pill, giving you more of everything your body needs. Reliv Now

Contains more vitamins and minerals than leading multivitamin pills, in an easily absorbable liquid form. You get double the amount of vitamins B and E, and as much as eight times the vitamin C. In addition, Reliv Now delivers higher levels of essential minerals such as copper, zinc and calcium.

Reliv Now provides many antioxidants not found in popular vitamin brands, including patented Pycnogenol® — one of the most cutting-edge ingredients available today. More than 170 studies have demonstrated Pycnogenol’s ability to fight free radical damage, improve blood circulation, lower blood glucose, and improve visible signs of skin aging in women aged 55-68 among other benefits.

Daily supplements with extracts from French Maritime Pine bark may boost endurance and reduce cramping by controlling oxidative stress, according to a new study.

* Comment: “With Reliv Now with LunaRich my energy levels have absolutely soared. I’m at the top of my game mentally and I feel fantastic! I know it sounds strange, but I’m just happier and in a more joyful demeanor.” ~ Mary Light, Huntingburg, IN

* Comment: For Heather Rogers, of Newburyport, Massachusetts, it has been one “miraculous” year since starting the Reliv products. Heather was spending her days on the couch, either sleeping or crying from the pain of a mysterious neurological disorder that doctors couldn’t diagnose. She couldn’t walk, speak clearly or swallow, and she had no use of her hands. “I felt like a burden on my family,” says Heather, a wife and mother of three, who started improving with Reliv’s essential nutrition. “One day, I was strong enough to walk by myself from the couch up to the kitchen. It was a huge moment.”

Today, Heather can do just about anything, including playing baseball with her children and bowling. She was even able to help coach her daughter’s cheerleading squad.

Just a year before, my husband had to help me get up and down the bleachers so I could watch,” she says. “As I share my story, I’ve learned that there are a lot of people out there with non-specific neurological disorders. Knowing what I know about this great company and its product, I don’t ever want to see someone sitting on the couch with no hope. I have to share it.”

* Comment: Manley Lane, from Bath, Maine, has seen significant improvements with his health since starting on Reliv products two years ago.
“When I was introduced to Reliv, I was suffering from two auto-immune diseases, causing needle-like shocks that radiated throughout my legs,” Manley recalls. “I wound up losing my ability to drive and pretty much was confined to a wheelchair.”

Within three months of starting on Reliv’s essential nutrition, Manley was preaching at his church standing on his feet, rather than sitting in a chair. “The other day, I hiked to a fishing pond with a four-pound pack on my back!” he notes. “I never before realized the importance of great nutrition for our bodies.”

Now Manley has added GlucAffect to his nutrition regimen, and is reporting even more results. “At my annual physical, I weighed five pounds less than the previous year,” he states. “My blood pressure has improved, and my blood sugar has stabilized. “I now have even more energy and vitality than before!”

* Comment: Connie Gray of Austin, Texas, is an emergency room nurse, and she admits she’s a skeptic when it comes to most nutrition products. But when she heard about Reliv, she was intrigued enough to give it a try and to get her husband, Austin Kessler, to join her. Both suffered from ongoing allergies, the kind that often led to flu-like symptoms, sinus infections and bouts of bronchitis. A thyroid condition meant Connie felt cold all of the time. And Austin’s cholesterol levels were troubling.

“After beginning to take Reliv shakes, I felt warmer,” Connie says. “And I’ve felt warm ever since.” Both got relief from allergies and for the first time in years, Connie’s had neither her annual sinus infection nor missed any work because of bronchitis. Austin lost weight, started sleeping better and his cholesterol dropped. His triglycerides were down, as well. Connie counts on a Reliv shake for a pick-me-up during her 12-hour shifts in the ER. “Sometimes I don’t have time to stop and eat,” she says, “so when I feel my blood sugar getting low, I go to my locker and fix a shake.”

* Comment: For six years, Cinthya Servín Castillo of Fremont, Nebraska, suffered chronic migraines. Her friend came to visit, “and she saw how bad I was feeling, suffering from my daily migraine,” Cinthya recalls. “She told me that she had started taking Reliv Now for her own headaches and that they were so much better. I wanted Reliv immediately.”

A month after starting the essential nutrition, Cinthya says her pain had significantly improved. She was also getting relief from other symptoms, including constipation and backaches. But that was just the beginning of her Reliv renaissance. Cinthya also suffered from panic attacks and nervousness, making it difficult to be the kind of wife and mother she wanted to be. “Now my family tells me that I look happier,” she says. “Before, my kids couldn’t be loud around me, and now they can be kids again.”

Cinthya’s sense of wellbeing was so great that she wanted everyone in her family to try Reliv. “My husband, José Escobar, also suffered from chronic back pain and by day three of taking Reliv, he was noticing a difference.”

* Disclaimer: The statements contained in this material have not been evaluated by the Food and Drug Administration. The personal testimonials shared reflect individual experiences and are not necessarily typical of the results you may obtain. Reliv products are not intended to diagnose, treat, cure or prevent any disease.

How much should I take daily? Suggest one scoop daily in the beverage of your choice; 1/2 in morning and 1/2 in the afternoon so your body can be fed throughout the day. If you are dealing with a health issue you can take 2 – 3 scoops per day.

How soon will I see results? Nutrition directly affects the daily functioning of our bodies. Everyone’s body is different as to how much they need nutritionally and how quickly they will see results. Better skin, nails, improved energy, improved moods, relief from minor aches and pains, better sleep, more productivity, and mental clarity are just a few results that people notice. People are seeing results in numerous areas of chronic health as well.

A small percentage of people experience a “correcting crisis” while on any optimal nutrition program, stay the course – it is working! When your body begins cleaning out toxins, metabolic wastes and the like, you may experience uncomfortable symptoms. These symptoms are transient, however, and are a clear indication that your improved nutrition program is truly working and leading you to improved health. Make sure you are drinking plenty of water to help flush out these toxins. Remember that healing is a process, and new benefits can often be seen even after several months on the products.

Are there any drug interactions? It’s always a good idea to check with your healthcare professional if you’re concerned.

Additional Questions? Please contact us and we’d be more than happy to answer your questions. 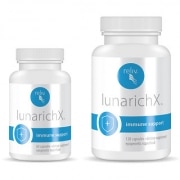 Getting to Know Now: Cutting-edge Nutrition

* Disclaimer: These statements have not been evaluated by the Food and Drug Administration. Reliv products are not intended to diagnose, treat, cure or prevent any disease. The results may vary from person to person.